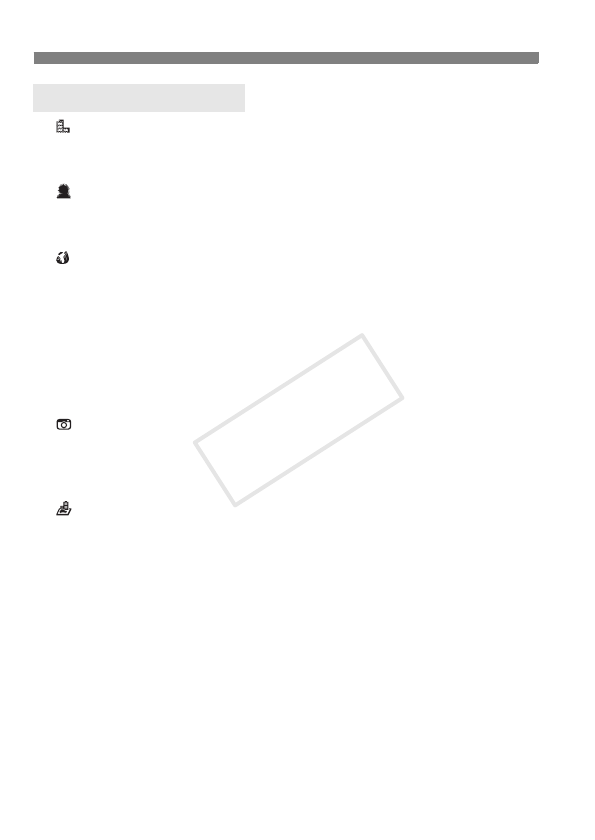 232
U Creative Filters
Grainy B/W
Makes the image grainy and black and white. By adjusting the
contrast, you can change the black-and-white effect.
Soft focus
Gives the image a soft look. By adjusting the blur, you can change
the degree of softness.
Fish-eye effect
Gives the effect of a fish-eye lens. The image will have a barrel-type
distortion.
Depending on the level of this filter effect, the area trimmed along
the periphery of the image changes. Also, since this filter effect will
magnify the image center, the apparent resolution at the center may
degrade depending on the number of recorded pixels. So in step 4,
set the filter effect while checking the resulting image.
Toy camera effect
Gives a color cast typical of toy cameras and darkens the image’s
fours corners. By adjusting the color tone, you can change the color
cast.
Miniature effect
Creates a diorama effect. You can change where the image looks
sharp. In step 4, you can press the <C> button to change the
orientation (vertical/horizontal) of the white frame that shows where
you want the image to look sharp.
Creative Filter Features
COPY