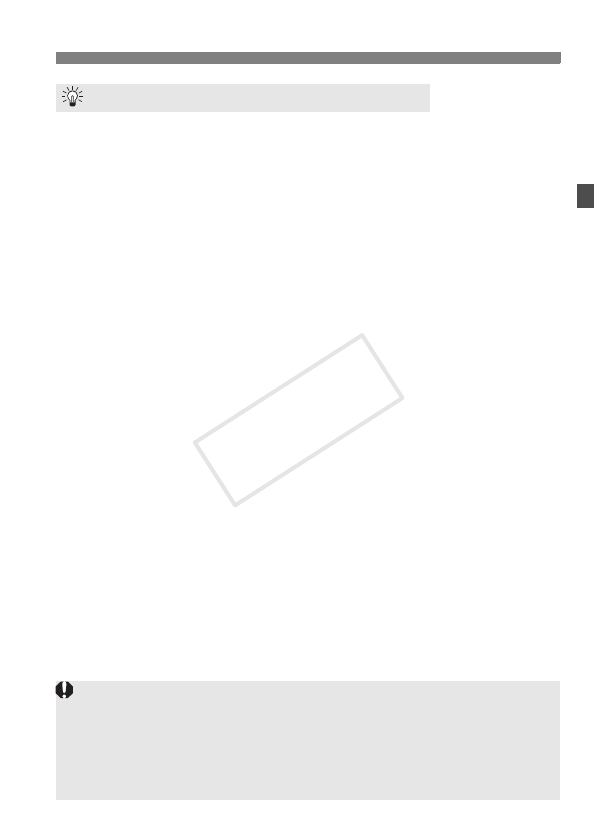 27
Charging the Battery
Upon purchase, the battery is not fully charged.
Recharge the battery before using.
Recharge the battery on the day before or on the day it is to be
used.
Even during storage, a charged battery will gradually drain and lose
its power.
After recharging the battery, detach it and unplug the charger
from the power outlet.
When not using the camera, remove the battery.
If the battery is left in the camera for a prolonged period, a small
amount of power current is released, resulting in excess discharge
and shorter battery life. Store the battery with the protective cover
(provided) attached. Storing the battery after it is fully charged can
lower the battery’s performance.
The battery charger can also be used in foreign countries.
The battery charger is compatible with a 100 V AC to 240 V AC 50/
60 Hz power source. If necessary, attach a commercially-available
plug adapter for the respective country or region. Do not attach any
portable voltage transformer to the battery charger. Doing so can
damage the battery charger.
If the battery becomes exhausted quickly even after being fully
charged, the battery has reached the end of its service life.
Purchase a new battery.
Tips for Using the Battery and Charger
After disconnecting the charger’s power plug, do not touch the prongs for
at least 3 sec.
Do not charge any battery other than a Battery Pack LP-E8.
The Battery Pack LP-E8 is dedicated to Canon products only. Using it
with an incompatible battery charger or product may result in malfunction
or accidents for which Canon cannot be held liable.
COPY