Out of 0 Ratings
Owner's of the Canon Digital Camera Canon Eos Rebel T3i Digital Slr Camera gave it a score of 0 out of 5. Here's how the scores stacked up:

Owners of the Canon Digital Camera Canon Eos Rebel T3i Digital Slr Camera have given it a Reliability score of 0 out of 5.

Owners of the Canon Digital Camera Canon Eos Rebel T3i Digital Slr Camera have given it a Durability score of 0 out of 5.

Owners of the Canon Digital Camera Canon Eos Rebel T3i Digital Slr Camera have given it a Maintenance score of 0 out of 5.

Owners of the Canon Digital Camera Canon Eos Rebel T3i Digital Slr Camera have given it a Performance score of 0 out of 5.

Owners of the Canon Digital Camera Canon Eos Rebel T3i Digital Slr Camera have given it a Ease of Use score of 0 out of 5. 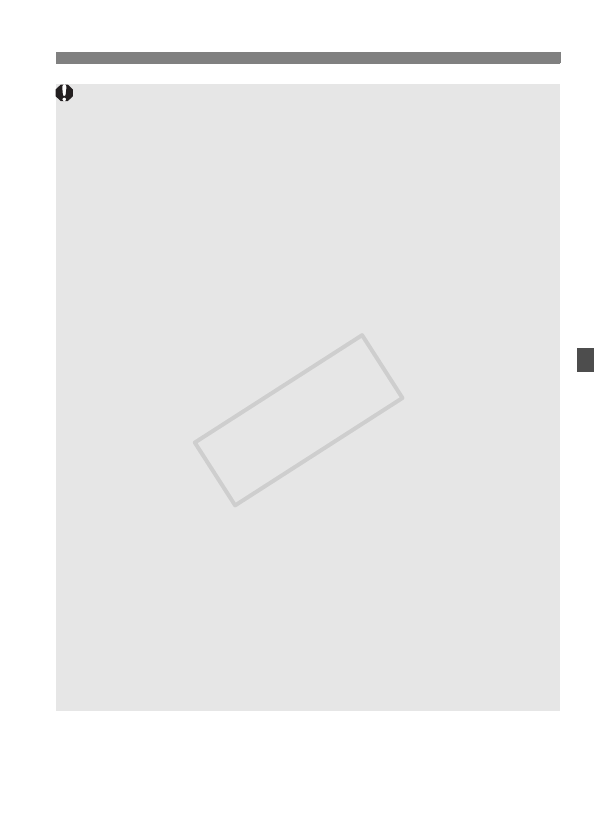 139
Live View Shooting Cautions
White <s> and Red <E> Internal Temperature Warning Icons
If the camera’s internal temperature increases due to prolonged Live
View shooting or a high ambient temperature, a white <s> icon will
appear. If you continue shooting while this icon is displayed, the image
quality of still photos may deteriorate. You should stop the Live View
shooting and allow the camera to cool down before shooting again.
If the camera’s internal temperature further increases while the white
<s> icon is displayed, a red <E> icon will start blinking. This blinking
icon is a warning that the Live View shooting will soon be terminated
automatically. If this happens, you will not be able to shoot again until the
camera’s internal temperature decreases. Turn off the power and let the
camera rest for a while.
Shooting with the Live View function at a high temperature for a
prolonged period will cause the <s> and <E> icons to appear earlier.
When not shooting, turn off the camera.
Live View Image Cautions
Under low- or bright-light conditions, the Live View image might not
reflect the brightness of the captured image.
If the light source within the image changes, the screen might flicker. If
this happens, stop the Live View shooting and resume shooting under
the actual light source to be used.
If you point the camera in a different direction, it might throw off the Live
View image’s correct brightness momentarily. Wait until the brightness
level stabilizes before shooting.
If there is a very bright light source in the picture, such as the sun, the
bright area might appear black on the LCD monitor. However, the actual
captured image will correctly show the bright area.
In low light, if you set the [6 LCD brightness] to a bright setting,
chrominance noise may appear in the Live View image. However, the
chrominance noise will not be recorded in the captured image.
When you magnify the image, the image sharpness may look more
pronounced than it really is.
COPY