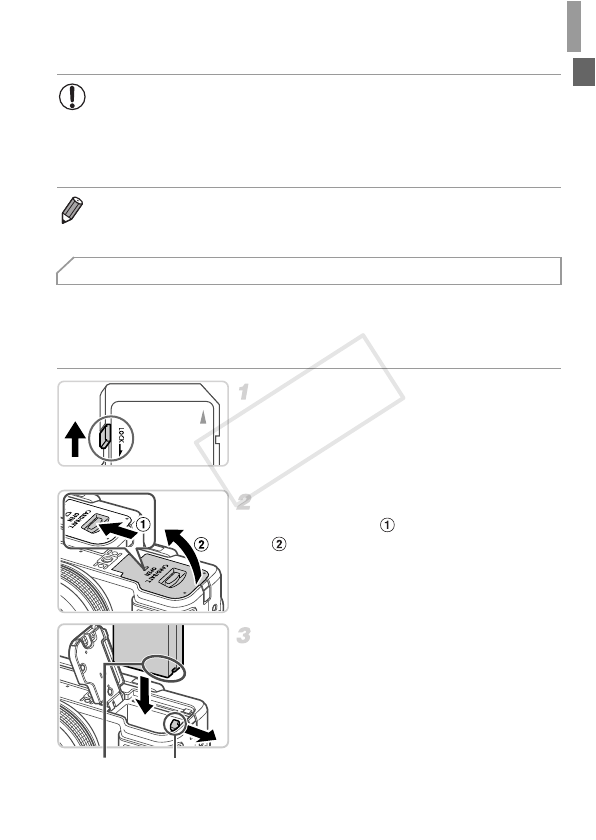 Initial Preparations
15
Insert the included battery and a memory card (sold separately).
Note that before using a new memory card (or a memory card formatted in
another device), you should format the memory card with this camera
(p. 171).
Check the card’s write-protect tab.
z Recording is not possible on memory cards
with a write-protect tab when the tab is in the
locked (downward) position. Slide the tab up
until it clicks into the unlocked position.
Open the cover.
z Slide the switch ( ) and open the cover
().
Insert the battery.
z While pressing the battery lock in the
direction of the arrow, insert the battery
facing as shown and push it in until it clicks
into the locked position.
• To protect the battery and keep it in optimal condition, do not charge
it continuously for more than 24 hours.
• For battery chargers that use a power cord, do not attach the charger
or cord to other objects. Doing so could result in malfunction or
damage to the product.
• For details on charging time and the number of shots and recording time
possible with a fully charged battery, see “Specifications” in the Getting Started
guide.
Inserting the Battery and Memory Card
Terminals Battery Lock
COPY