Reliability
4.5
Out of 2 Ratings

Owners of the Furuno Radar Detector 1623 have given it a Reliability score of 4.5 out of 5.

When it comes to products, Reliability rates high in importance. Your Radar Detector’s ability to perform and maintain its functions during everyday use, as well as extreme use or under unexpected circumstances, is important when making purchase or repair decisions.

Durability
4.0
Out of 2 Ratings

Owners of the Furuno Radar Detector 1623 have given it a Durability score of 4.0 out of 5.

How will your Radar Detector hold up over time and withstand the wear and tear of constant or long-term use? A product with strong Durability is a product that was made to last and provide a good ownership experience over it’s lifetime.

Maintenance 3.5
Out of 2 Ratings

Owners of the Furuno Radar Detector 1623 have given it a Maintenance score of 3.5 out of 5.

Most Radar Detector owners intend to keep their Radar Detector in good working condition. Knowing up front if the Maintenance or repair of a product is easy or difficult can have a profound impact on your decision to make a purchase.

Performance 4.0
Out of 2 Ratings

Owners of the Furuno Radar Detector 1623 have given it a Performance score of 4.0 out of 5.

Radar Detector's that are purchased and meet or exceed expectations usually share the trait of good Performance. Feeling that a product was worth the purchase because it does everything you expected, and does it well, is a clear indicator of a product that truly performs.

How hard is this Radar Detector to operate? If purchased, would tons of time be lost trying to figure out how it works? Simply put, Ease of Use is a measure of how easy a product is to use. Having this knowledge prior to purchase can help avoid buyer’s remorse. 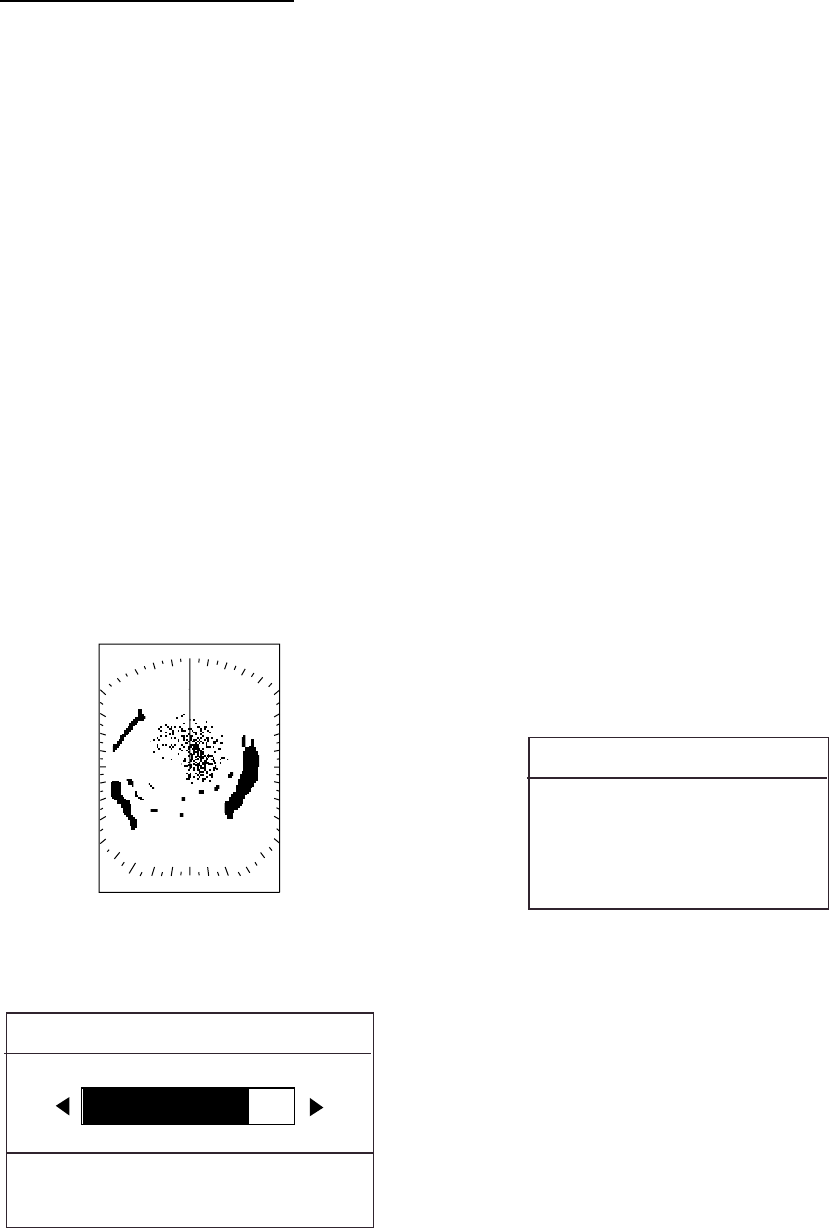 1. OPERATION
6
Manual A/C SEA adjustment
While observing the screen and the A/C
SEA tuning bar, press ◄ or ► to set the
A/C SEA. The setting range is 0-100.
4. Press the [MENU/ESC] key to finish.
1.9 Suppressing Rain Clutter
The vertical beamwidth of the antenna is
designed to see surface targets even when
the ship is rolling. However, by this design the
antenna will also pick up rain clutter (rain,
snow, or hail) in the same manner as normal
targets. The illustration below shows the
appearance of rain clutter on the display.
The A/C RAIN control adjusts the receiver
sensitivity as the A/C SEA control does but
rather in a longer time period (longer range).
The higher the setting the greater the
anti-clutter effect.
Rain clutter at screen center
1. Press the [GAIN] key consecutively until
the display shown below appears.
A/C RAIN
[GAIN] : GAIN MENU
[MENU/ESC] : Exit.
65
A/C RAIN adjustment window
2. While observing the screen and the A/C
RAIN tuning bar, press ◄ or ► to adjust
the A/C RAIN. The setting range is 0-100.
3. Press the [MENU/ESC] key to finish.
1.10 Measuring the Range
The bearing to a target can be measured by
the range rings, by the cursor and by the
VRM (Variable Range Marker).
Measuring range by the cursor
Operate the cursor pad to place the cursor on
the inside edge of the target. Read the range
to the cursor at the bottom right corner of the
display.
Measuring range by the range rings
Count the number of rings between the
center of the display and the target. Check
the range ring interval and judge the distance
of the echo from the inner edge of the nearest
ring.
Note: The range rings can be turned on or off
with RINGS on page 1 of the System menu.
Measuring range by the VRM
1. Press the [MARK] key to show the Mark
menu.
MARK MENU
[GAIN] : EBL
[ALARM] : VRM
[MARK] : TLL OUTPUT
Mark menu
2. Press the [ALARM] key to display the
VRM, which is a dashed ring to
distinguish it from the range rings.
3. Operate the cursor pad to place the VRM
on the inside edge of the target.
4. Check the VRM readout at the bottom left
corner on the screen to find the range to
the target.
To anchor the VRM on the screen, press the
[MENU/ESC] key. To erase the VRM, press
the [ALARM] key twice with the MARK MENU
displayed.