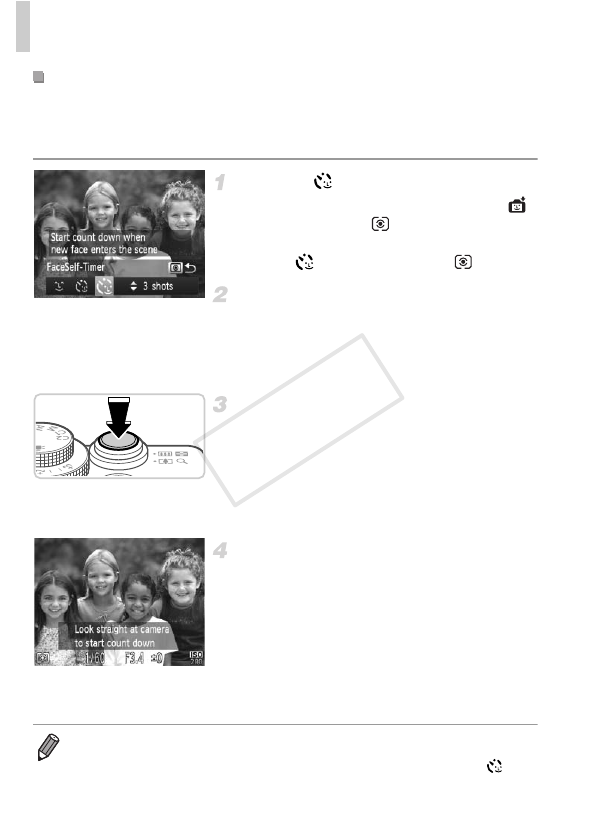 Special Modes for Other Purposes
84
The camera will shoot about two seconds after detecting that the face of
another person (such as the photographer) has entered the shooting area
(p. 108). This is useful when including yourself in group photos or similar shots.
Choose .
z Follow steps 1 – 2 on p. 68 and choose ,
and then press the button.
z Press the qr buttons or turn the 7 dial to
choose , and then press the button.
Compose the shot and press the
shutter button halfway.
z Make sure a green frame is displayed around
the face you focus on and white frames
around other faces.
Press the shutter button all the way
down.
X The camera now enters shooting standby
mode, and [Look straight at camera to start
count down] is displayed.
X The lamp blinks and the self-timer sound is
played.
Join the subjects in the shooting
area and look at the camera.
X After the camera detects a new face, the
lamp blinking and self-timer sound will speed
up. (When the flash fires, the lamp will remain
lit.) About two seconds later, the camera will
shoot.
z To cancel shooting after you have triggered
the self-timer, press the n button.
Using the Face Self-Timer
• Even if your face is not detected after you join the others in the shooting area,
the camera will shoot about 15 seconds later.
• To change the number of shots, press the op buttons after choosing in
step 1. [Blink Detection] (p. 64) is only available for the final shot.
COPY